Nestor Kaputo received his Associates in Engineering from GSU Perimeter College last year.
Before working as a Manufacturing Engineer from January to May 2020, he tutored math, physics, and engineering at GSU PC from Spring 2017 to Fall 2019 while he was a full-time student.

He was also part of a research team in the Cyber Forensics Innovation Laboratory at Georgia Tech in Summer 2019. They used software that operates on self-driving cars, applied principles of Machine and Reinforcement Learning using a Python API and Unreal Engine to complete the project in the Lab.

Nestor is a CS junior student in the Honors College at GSU and planning to graduate with a Bachelor’s degree in Fall 2021.

Due to his passion for coding and electronics, he pioneered the Arduino based projects on campus and some math and engineering faculty members incorporated Arduino projects in their syllabus as homework projects for their students since Fall 2018.

Nestor is currently a UAP student researching in the EBCS labs.

Nestor was nominee the Dean’s Award recipient this year. He was very happy to see that his work on campus and out of campus was recognized by GSU. In addition to seeing some of his Arduino based projects are now part of the homework projects for students taking math and engineering classes at Perimeter College, he was the voice of underrepresented children who flee from countries devastated by war when he was on Capitol Hill in Washington DC.

Nestor likes to spend time with his family and friends. He enjoys driving, traveling, and discovering new places. He loves interacting with people, embracing new cultures and diversity. He also enjoys playing soccer. 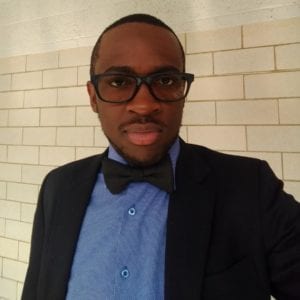